Kitten in the Road It was a late summer evening in 2006.  We had four teenagers still living at home, two cats, two red eared slider turtles and an assortment of aquarium fish.  We were having a building remodeled to house our small private school and the hubby was working a swing shift job.  This particular evening we were planning on going over to see the progress on the building as soon as my husband got home from work.

But when he came through the door that night he was carrying a tiny white kitten with one gray spot (that eventually disappeared completely) on it’s back.  Darren said he’d come across the cat sitting in the middle of the road, and it wouldn’t move.  So he stopped and called to it, “Here kitty, kitty!” and it ran right up to him.  “Well why on earth did you do that?!” I wondered without saying a word. We already had two cats and a very full house!

A quick perusal of the little kitty revealed the poor thing had infected eyes.  It was late in the evening and there was nothing that could be done about it that night.  So we gave him food, water and a soft bed and settled him in the bathroom where he’d be safe from the older cats.

First thing the next morning I took to the telephone.  I just didn’t see how we could keep three cats so I made a few calls to shelters to see if they could take him.  As soon as I mentioned his infected eyes they all told me they would have to put him down.  I was bewildered and didn’t know what to do.  But as far as the rest of the family was concerned the deal was sealed!

Just like that, we had become a three cat family!   So we made him an appointment with the vet and we named him Oliver (after the orphan Oliver Twist who lived on the streets).  When our veterinarian heard the story he said Ollie was certainly a very clever little kitty, to sit in the road and hitch hike like that so that someone would stop and take him home.

That cat was sweet, full of personality and just a little bit pushy.  Our youngest daughter quickly decided he was “her kitty” and showered him with love and affection.  Oliver also formed a bond with our oldest son who “gently roughhoused” with him more than the rest of us did and for some strange reason he loved that!  Ollie went on to live a happy, comfortable life as part of our family for the next ten years. 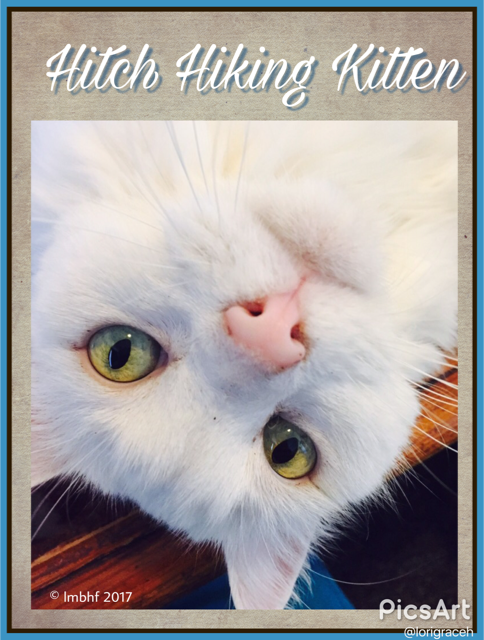