Signs Your Cat May be Sick

Ki-gi, Butterscotch, a feral kitten that had some kind of a neurological or muscular disease  (but no name), Christopher, Daphne, Neo, Sadie, Calli, Oliver and Kassie – those are all the cats that I’ve owned or cared for in my lifetime.

I was a baby when my family owned Ki-gi (whom I am proud to have named). I was so young then I don’t remember what became of him.  Butterscotch was an outdoor cat who ultimately (long story) died of an injury he received in a cat fight.  The feral kitten, Christopher and Daphne (outdoor cats) and Neo (an indoor cat who clawed through a screen to get out) were all hit and killed by cars.  Sadie had health problems from the time we got her as a kitten.  She lived many happy years before she died of what we believe was a heart attack.  Calli, my favorite cat of all time, is still living and she and I are best friends to this day.  Kassie, the sassiest cat I’ve ever met, belongs to my grown daughter and has gone to live with her.

But it is Oliver, a ten year old, regal, long haired, all white cat, who inspired me to write this post.  At first I thought he had died purely from being poisoned after eating a potted  lily I had left on the counter. At my suggestion, the veterinarian made the same assumption and looked no further for a cause to his illness. It wouldn’t have mattered though, if he’d investigated and found the cause of ailments I’ve come to believe were at least partially responsible for his unfortunate demise.

It took me awhile come to terms, somewhat, with the fact that my negligence in leaving the lily where he could get to it, contributed to Ollie’s death. But afterwards I pondered his behavior over the months and weeks before he died.  He’d become irritable, and consumed A LOT of water.  I didn’t realize he was consuming so much water until I compared how fast the water dish would empty when I had two cats to how slowly it emptied when I had just one. I also realized that Ollie’s weight loss hadn’t all happened in his last two weeks after eating the lily.

So I came to believe that while eating the lily was pretty certainly instrumental in Oliver’s death, that his health had been failing for awhile before that.  So I decided to write this post in the hope that I might be able to help other cats and their owners.

First:  Please be aware that some plants can be very poisonous to cats.  While some common house plants are harmless to cats, others can cause them irritation or upset stomachs and still others can be deadly. Keep poisonous plants away from your cats!

Here’s what PetMd has to say about lilies,

“There are many different species of plants called “lily”: Easter lily, day lily, Asiatic lily, tiger lily, peace lily, calla lily, and lily of the valley, among others. And though they may be beautiful to look at, a cat could die of kidney failure if he should eat any part of these toxic species and not receive treatment immediately. In fact, as little as two leaves can make your cat sick, and if left untreated, can become fatal in as little as three days.”

Second:  If your cat displays any of the following symptoms of poisoning, sickness or disease, please take them to a veterinarian. I wish I’d taken Oliver much, much sooner!

Signs of Sickness in Your Cat 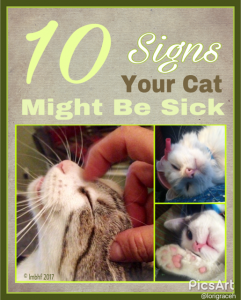 Is Your Cat Sick?

For a happier story about Ollie read The Kitten in the Road.
Here are some related products from Amazon that you might like.  Just click on the photo or the description to be redirected to Amazon where you can purchase the products.