February 14, 2017|Posted in: Family and Relationships, Holidays and Seasons It was a snowy November evening many years ago, in Layton Utah. I was happy to be attending a young singles activity at my church that night.  Recently I’d broken up with my boyfriend Mike, whom I’d dated for several years.  His enlistment in the air force was up and he had moved back to Ohio.  I missed him and I was looking forward to an evening out in hopes it would distract me from the loneliness I was feeling.

The other singles and I met at the home of our teachers, the Tarrs, who lived on the bench of the Wasatch Mountains.  From there we were going to carpool together and go bowling.  I don’t remember anything about who else was in attendance that night, but I remember a young airman with a super short haircut and loads of charisma!

At first I was going to drive a group to the bowling alley, but then because of the snow that handsome, chivalrous airman offered to drive instead!  I soon learned that this young fella was quite the flirt, witty and charming and that he had obviously taken a fancy to me.  His name was Darren Smith and that night I handily beat him at bowling for the first and only time ever!

(I didn’t know it at the time, but apparently Darren had already noticed me at church.  He tells the story of asking his brother, “Who is the girl with the pretty, long blond hair?” to which his brother replied, “She has a boyfriend.”  But Darren says he decided that didn’t matter and he made plans to figure out how to date me).

After bowling, we returned to the Tarr’s house for refreshments and Darren picked up a guitar and started to play and sing.  He coaxed me all night long to get me to sing along with him.  He had the charm turned on to the max!  Oh, how I loved it and oh how I wanted to sing with him!  But the thought that he might think I sang badly was mortifying and I stood steadfast in my resolve to keep quiet!  By the end of that wonderful evening, I had begun to fancy him right back!

It turned out that Darren was just 18 years old and I was 23.  When I returned home that night the first thing I said to my mom was, “Is an 18 year-old too young for me?”  She said no, and then she told me Mike wanted me to call him. 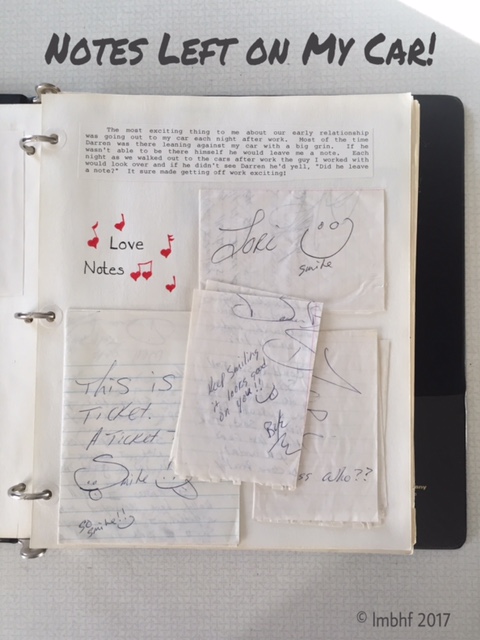 Long story short, Mike asked me to fly to Ohio to spend Thanksgiving with his family.  When I got off the plane he asked me to marry him.  He drove back to Utah with me and we spent a tumultuous year being engaged until we finally called it quits and he moved away again.  Meanwhile, Darren had also gotten engaged and then later broken his engagement off as well.

Attending the same church during that year that we were engaged to other people, Darren and I had a somewhat distant acquaintance with one another.  One lonely afternoon I looked up Darren’s older brother’s (he and his wife attended the church too) telephone number and I called to ask him if he knew how I could get in touch with Darren.  He told me that he was out of town but that he’d let Darren know I had called, upon his return.

A day or two later Darren returned my call and then he called me or came to see me almost every single day after that.  (But, I had chopped off my long hair and instead had short blond hair – poor guy!)

It just so happened, that I worked as a civilian secretary at the hospital on Hill Air Force Base where he was stationed.  He was working the swing shift at that time and he would stop by the hospital parking lot on his way to work and leave a note on the windshield of my car.  As we left work each day, my coworker would call across the parking lot, “Is there a note?!” Swept away by the romance of it all, I would happily call back, “Yes, there is!”  Every once in awhile, instead of a note Darren himself would be leaning against my car wearing his uniform and a sweet, cocky grin and oh how he would make my heart flutter!!

That’s how our love story began.

Willow Tree You and Me