What in the World are Frankincense and Myrrh?? All of you who celebrate Christmas probably know the song We Three Kings, about the wise men who brought gifts to the Christ child.  But just in case you don’t, I’ve included the lyrics below:

We three kings of Orient are
Bearing gifts we traverse afar.
Field and fountain, moor and mountain,
Following yonder star.

Born a king on Bethlehem’s plain,
Gold I bring to crown Him again,
King forever, ceasing never
Over us all to reign.

Frankincense to offer have I.
Incense owns a Deity nigh.
Prayer and praising all men raising,
Worship Him, God on high.

Glorious now behold Him arise,
King and God and Sacrifice.
Alleluia, alleluia!
Sounds through the earth and skies.

Of course we all know what “gold” is and most of us wish we had a little (or a lot)  more of it!  But have you ever wondered what “frankincense” and “myrrh” are?

Below are pictures and descriptions of the gold, frankincense and myrrh that are very similar to the gifts that the kings brought. 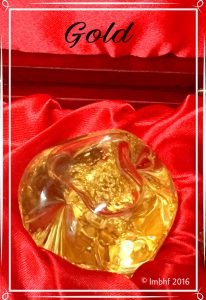 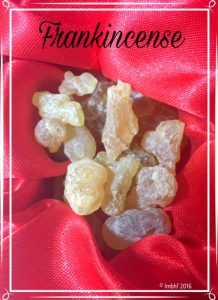 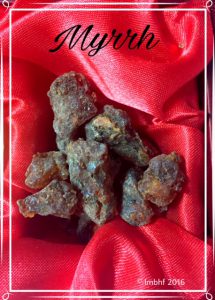 Gold, of course, is a precious metal that is mined from the earth and streams.  It is very valuable and if you possess a lot of it, then you are considered wealthy!  In order to make the box affordable, the gold my pretty box contains is a small amount of gold shavings enclosed in a clear plastic, rock shaped container full of water that makes it sparkle and shine.

Frankincense is dried sap from Boswellia sacra trees that grow in and around Africa. The dried sap is burned as incense and is believed to have medicinal properties. It is a cream to pale yellow color and has a lemony, sweet, woody aroma.

Myrrh is also dried sap.  It comes from Commiphora myrrha trees that also grow in and around Africa.  Today it is a commonly used essential oil with a smoky, sweet, sometimes bitter smell.  It is an orange tinted medium brown color.  Its uses are as a spice, to purify the dead and medicinal.

So if you didn’t already know what frankincense and myrrh are – now you do!

« The Ultimate List of Stocking Stuffer Ideas for Adults!
Which One is Your Favorite Christmas Movie? »