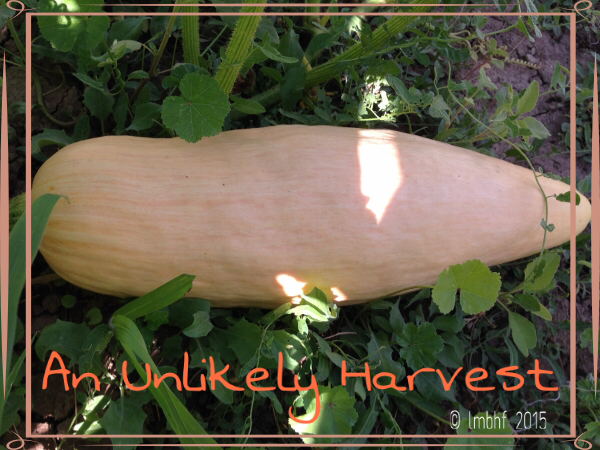 Last Spring, with my garden soil freshly tilled and warming in the sunshine, I happily went to the local nursery and purchased some young vegetable sprouts, a pumpkin plant for my grandchildren and cantaloupe and cucumber for my husband.

As a child spending countless hours by my daddy’s side in his beautiful yard full of fruit trees, ornamental shrubs, roses and various other flowers and interesting plants, I developed a love for gardening.  But while my dad earned a Master Gardener’s  Certificate, I am only an amateur gardener at best!

I planted the little plant sprouts in my garden and carefully watered them. After a couple of days they seemed to be well established and I was pleased.

You can imagine my disappointment a few days later when I went out to my garden and found that my three year old grandson had pulled each of the tiny plants up by their roots. They laid on top of their little mounds of soil sadly wilting.

I quickly put them back into the ground and patted the dirt in firmly around them. Then I gave them a generous drink of water and hoped I had gotten to them in time to save their little lives.  Happily, the next day I went out to the garden and found all three of them standing up tall and looking healthy. I couldn’t help but feel just a little bit of pride in my ever improving gardening skills.

Alas, a couple days later I sadly found my cucumber plant dry and shriveled up. It seems I hadn’t watered my garden enough in the previous day or two. My pride in my gardening skills deflated just a little and I thought how my husband would be disappointed not to have the cucumbers he’d been hoping for.

With renewed determination I turned my attention to my remaining cantaloupe and pumpkin plants.  They continued to prosper and grow and soon had little blossoms. The resident bees industriously did their job and pollinated the flowers and I watched anxiously for the fruits to begin to form. It didn’t take long and I had a couple of pumpkins growing and the “cantaloupe” had a couple of  fruits on it as well.

Over the next few days the “cantaloupe” began to take on a strange oblong shape. That had me perplexed for awhile but then I smugly made what I thought was a brilliant deduction. I must have mixed up the cucumber and cantaloupe plants. These little green oblong fruits must actually be cucumbers!  Yes, that had to be the answer.

Over the next few weeks the “cucumbers'” grew bigger and bigger and BIGGER!  Their color began to change from green to a pale pinkish orange. Now I admit that I’m far from the Master Gardener that my dear sweet daddy was, but I was pretty certain these weren’t cucumbers!

I posted a picture of these strange fruits on my Facebook page along with an abbreviated version of the amusing story I’ve related above. My niece Joi Lin, who is a bit of a gardener in her own right, posted this reply,

“Maybe your cuke and your cantaloupe cross-polinated, and it’s a cucaloupe? When you plant cukes, melons, and squashes near one another, it’s really easy (and not uncommon) for them to do that…..”

Since the other plant that survived had clearly produced pumpkins, that got me to wondering, “Was this strange fruit I’d cultivated with my precarious gardening skills a Cantaumpkin or a Pumcalope?  Maybe it was a Cumpkin or Pucumber?”

Or perhaps it was simply a banana squash!  But where that would have came from, I do not know.